Anita Hunter though she would never have children. And after failed fertility treatments, the 33-year-old from Shrewsbury almost gave up hope. “Then I started having acupuncture,” She says. “Six months later I was pregnant.”

Remarkably, Anita is not alone in having frustration turn to joy by the Chinese practice of having needles inserted into the skin. In the space of 18 months, a total of five women who thought they would never have kids fell pregnant after treatment from the same Chinese acupuncturist – Dr Daian Zou, based in St. John’s Hill in Shrewsbury.

Wellington-based Kathrine Griffiths, along with Caroline Tanner and Debbie Walker of Shrewsbury are among those who also became pregnant following treatment.

The amazing news comes amid continuing claims that common fertility treatments do little or nothing to boost many people’s chance of getting pregnant. Medical experts now say that rather than taking a fertility drug or undergoing a form of insemination, couples would be just as successful conceiving if they were encouraged to ‘keep trying’.

And judging by the delight on Anita’s face as she cradled her seven-week-old bundle of joy, daughter Daisy-Rose, when we met last year, maybe they should try acupuncture.

Anita explains the predicament that she and her partner Lester were faced with. 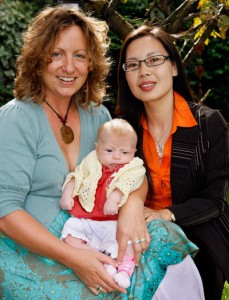 “We were trying for about a year and a half but had been told many moons ago by a GP that I may not be able to have children because my mum and my nan had early menopauses. I had tests  and my eggs were decreasing and I knew there was a possibility that I might not be able to conceive.

“When my partner and I started trying we got checked out at the fertility clinic and it was found that I did not ovulate frequently and I was told that I might have an early menopause.

“I was gutted, but to be honest not all that surprised because in a way I had got my head around the fact that I might not ever get pregnant – but now I’d met the man of my dreams.”

She had also been diagnosed as having polycystic ovary syndrome,  which contributes to difficulties conceiving. Part of Daian’s acupuncture treatment was directed at this.

A course of fertility treatment followed, in which Anita took clomid tablets and underwent an operation of ovarian drilling to help her ovulate – something she describes as “a process”;

For her, the treatment didn’t work. Then she heard about the effects of acupuncture.

As Anita began a course of acupuncture after researching its benefits of fertility, she says she immediately began to feel ‘more relaxed and less anxious about getting pregnant”.

Daian explains the effects of acupuncture: “One lady tried IVF three times and it just failed. She nearly gave up hope when she came here. Coming here was her last hope and she because pregnant”.

How acupuncture works, says Daian, is that it treats not the symptoms but the whole body.

She explains how after  a consultation with the patient, needles are inserted into the skin at so-called acu-points and can help regulate the way the body functions. It is said that acupuncture promotes the circulation of blood in the pelvic cavity and can improve ovarian functioning and regulate hormonal imbalance.

Another factor is that it can reduce stress levels which can be high when couples are trying for a baby.

Daian says she feels honoured to help couples have children. “It’s the best news in the world.” she says.

Kathrine Wyant works in Wellington and had been trying to conceive for almost a year when she began to make the trip to Shrewsbury for acupuncture with Daian.

At the same time she was having fertility treatment which did not appear to be working, but in May last year she became pregnant, she believes after one extended session with Daian.

“It definitely did help”, she says, “I believe it did  because if nothing else it relaxed me. The last session I had was an extended session and I’m convinced it helped.”

Anita herself can barely describe her feelings when in October 2007 she discovered she was pregnant.

She says: “I did not believe it – I thought I was going through early menopause and I would not believe it fully until we had the first scan. I think I put my feelings on hold, I was a bit in denial.”

Seeing her unborn child bouncing around on a television monitor, however, changed that.

“It was incredible. I was in complete amazement and I was so extremely happy. It was real and I had that feeling of completeness. She is my little miracle. It’s my miracle baby and I’m seriously convinced that Daian helped”.