A DELIGHTED couple are enjoying life with their own little miracle – and say it is all thanks to acupuncture.

Beth Lakelin, 38, from Belle Vue, Shrewbury, had been trying to conceive with partner Stephen Coales, 41, for two years.

Doctor said the couple were medically sound but Beth feared her age was curbing her attempts to conceive.

Baby Olive was born in November.

Beth told Shrewsbury Living: “It was really frustrating that I wasn’t getting pregnant.  I felt like my clock was ticking. I wasn’t in my 20s anymore. During the second year when nothing had happened we went to get checked out and ensure there were no fertility problems. We were both absolutely fine which gave us peach of mind.

Next I made some lifestyle changes and cut out caffeine and alcohol from my diet, but still nothing happened”.

Beth, who also has a 16-year-old daughter Georgia, made an appointment with Dr. Zou and was delighted when she fell pregnant three weeks later. 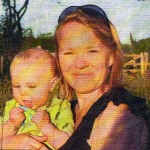 “I couldn’t believe it had worked and so quickly too”, said Beth.

“She entered needles into my head, lower abdomen, legs and feet and I really do believe that it boosted something”.

Acupuncture is a 5,000-year-old practice originating from China whereby thin needles are inserted into the body at precise points to unblock energy channels.

She said:” each session is custom-made for the client. I get a whole picture of the person. I have to balance the hormones and stimulate the blood flow into the ovaries and female organs to create a healthy environment for a pregnancy.”

She added: “People come here as a last resort and I’m glad I can help them. You get a lot of satisfaction from this job”.