A North Shropshire couple are celebrating the arrival of their own little miracle – and have put it down to Chinese acupuncture treatment.

Vanessa and Jack Hepplethwaite, from Whitchure, were told by doctor there was very little hope of them ever being able to have a child because of Vanessa’s age – she is 42. She claims she had been told she couldn’t have IVF treatment because she was over 35. 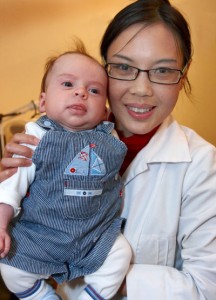 But after she visited Dr Daian Zou at St. John’s Hill Clinic for Chinese Medicine in Shrewsbury for treatment for a bad back, she started having regular fertility sessions. In December last year she fell pregnant, despite being told she had less than a five per cent chance of doing so.

Baby William was born in September and is growing up as a healthy baby.

“All along the attitude from the NHS seemed to be if you are over 35 why are you bothering and by December the outcome of their investigation basically said the problem was with me and not with Jack and that I had very few viable eggs.

“Daian’s take on this was that we are both in good shape, taking regular exercise and looking after ourselves therefore out bodies are physically younger than our age in years. When I told her that the NHS said 35 was the cut off age she replied that she would treat me as a whole person regardless of my age which shouldn’t matter as long as I was fit and healthy.

“There was no treatment whatsoever from the NHS other than investigative. It was all down to Daian.

“Baby William is in a perfectly healthy condition and we are absolutely convinced that it was Daian’s treatment. She has been absolutely wonderful. ”

Dr Zou said: “Acupuncture, combined with herbal medicine, has been used for centuries to treat some causes of infertility.

“By strengthening the patient’s health, it allows the inborn ability of conception to take place. Every patient coming to us has different situation and needs to be diagnosed individually so that a treatment can be geared up to them”.