Browsing all articles in News
0

Acupuncture may be an effective way of easing severe period pain, a South Korean review of 27 studies suggests.

Researchers said there was “promising evidence” for acupuncture in treating cramps, but that more work was needed.

END_OF_DOCUMENT_TOKEN_TO_BE_REPLACED

I first met Dr. Daian Zou a few years ago when she did the business on my torn cartilage, the result of a mishap on the rugby field.

To quote one of Daian’s patients: “When I first arrived here the pain of staggering just 50 yards was almost unbearable. When I left, some 45 minutes later, I couldn’t believe the transformation.”

This is an often-heard response on introduction to a practice that dates back to before the 21st century BC.

She then completed an advanced training programme in acupuncture in the attached hospital at TCM University of Hunan Province. Since she arrived in the UK, Daian has worked at clinics in London, Hampshire and Shropshire.

Too see original scan of the full article on newspaper, please click here to download the PDF. 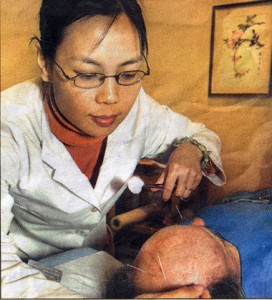 Acupuncture ‘more than a placebo’

Scientists say they have proof that acupuncture works in its own right.

Sceptics have said that any benefits gained from acupuncture are merely down to a person’s expectation that the treatment will work.

But researchers at University College London and Southampton University say they have separated out this placebo effect.

Their findings, based on a series of experiments and brain scan results, are published in the journal NeuroImage. END_OF_DOCUMENT_TOKEN_TO_BE_REPLACED

The effect is surprising, because scientists have previously predicted that parts of the cortex would be activated during acupuncture. END_OF_DOCUMENT_TOKEN_TO_BE_REPLACED

Women undergoing fertility treatment could have their chances of success boosted by acupuncture.

German researchers said they have increased success rates by almost 50% in women having in vitro fertilisation (IVF).

The theory is that acupuncture can affect the autonomic nervous system, which is involved in the control of muscles and glands, and could therefore make the lining of the uterus more receptive to receiving an embryo.
END_OF_DOCUMENT_TOKEN_TO_BE_REPLACED

BBC News, Friday, 18 March, 2005
Acupuncture is effective at relieving pelvic pain during pregnancy, a study says.
Pelvic girdle pain is common among pregnant women with one in three affected suffering severe pain. Researchers found acupuncture was better at easing the pain than standard and specialised exercising.

The team from Gothenburg’s Institute for the Health of Women and Children said the medical profession should be more open to using acupuncture. END_OF_DOCUMENT_TOKEN_TO_BE_REPLACED

September 19, 2009 in Acupuncture News by admin

Can acupuncture be a painkiller? – BBC

“Whatever the mechanism, though, it does seem that acupuncture can be as effective a painkiller as some traditional pain medication.” .. From BBC – Turst me I am a doctor

Can acupuncture be a painkiller?

END_OF_DOCUMENT_TOKEN_TO_BE_REPLACED

A lottery-funded scheme in Wiltshire has helped more than 600 people cope with drug addiction using acupuncture, a charity has said.

The New Highway charity has used the alternative therapy, alongside coaching, to help addicts in its 10 centres over the last two years.

It said it helped prevent relapses and combat anxiety.

But the NHS said not enough evidence existed to prove the effectiveness of acupuncture in treating drug addiction.

‘Cope with cravings’
New Highway, which was formerly known as Bath Area Drugs Advisory Service, won a £167,000 Big Lottery grant in 2010 to help people with drug and alcohol addictions through acupuncture therapy.

Kevin McAlpine, from the charity, said: “What we’ve seen is that it makes a significant difference with stress and being able to cope with cravings from withdrawal.”

Dr Max Bloomberg, a research fellow at Goldsmiths University of London, is sceptical of the benefits of the therapy.

He believes the care an addict receives when they receive acupuncture treatment is what they respond to.

“How do you tease apart other facts like care versus acupuncture?” Dr Bloomberg said.

“It often isn’t the acupuncture, it’s the lovely atmosphere, it’s the fact that someone really cares.”