A Shropshire couple who had almost given up hope of having children have been told there is no reason why they shouldn’t be able to start a family – thanks to treatment by a doctor of Chinese Medicine.

Darren, from Shrewsbury, who did not wish to give his last name, said: “My wife and I went to see a specialist at the hospital because we have been unsuccessful in trying for a baby and we found out the problem was with me. 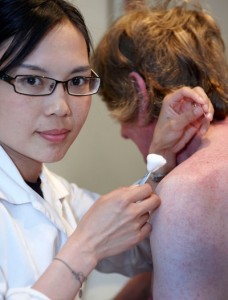 “I had a sperm count of around 3 million sperm per milliliter of semen, when 20 million or more is considered a normal count.

“At the same time I was receiving treatment from Daian Zou for a knee injury that meant  I could barely run properly and I mentioned that we were having difficulty trying for a baby.

“Not only did Daian fix my knee so I can run for miles now, she prescribed a course of acupuncture, herbs and lifestyle advice  that produced amazing results. Soon after starting treatment my sperm count went up to 5 million and now its well over the required 20 million which is enough for conception. ”

Dr Zou established her practice in Shrewsbury in 2002. She said: “Acupuncture, combined with herbal medicine, has been used for centuries to treat some causes of infertility. By strengthening the patient’s health, it allows the inborn ability of conception to take place.

“As a couple would have tried many ways to conceive, the pressure levels and tension are high…”.