This paper looks at the research into the effect of acupuncture on sperm parameters. To date little acupuncture research has been done in this area and even less to a good clinical research standard. Infertility is a growing problem and there is little available treatment, so research into a possible treatment is an important area. Thirteen papers were found on the subject of acupuncture and male infertility, all of which had a very positive outcome. Three of these papers were of better but still varying clinical research standard and this paper concentrates on them. These papers showed that motility, density and vitality were all encouraged with acupuncture. Gerhard (1992) found particularly good effect in younger men, non smokers and varicocele carriers. Whereas Siterman (1997 and 2000) found azoospermia and genital tract inflammation had the best results. These results are encouraging and hopefully will lead to further studies to validate these findings and move forward the understanding the role acupuncture could have in treating male infertility.

Approximately 15-20 % of all cohabiting couples are infertile. In 50 % of cases, it is the male factor that is responsible for the infertility (Kumar and Clark 1994).

There are many causes of male infertility, such as:

But in many men there is no apparent cause of the infertility.

Only very few conventional treatments are available. Andrological drug therapy can be given, such as testosterone patches. A varicocelectomy may be done if a varicocele is thought to be a cause.

For many men IVF and ICSI is the treatment used to give a better chance of the sperm and egg fertilizing. But sometimes donor sperm is the only option available, which is not a satisfactory outcome for a lot of couples.

There is general advice, which has some evidence that it may be effective in reducing fertility problems, such as:

Thirteen papers were found on acupuncture and male infertility. All of these suggested that acupuncture was effective in its treatment. Some of these papers were clinical studies and others were case studies. The information in many, however, was very limited. For example, some gave little more information than the number of men treated, the points used and the results in terms of successful or unsuccessful. This success was sometimes measured only in terms of a pregnancy (Zhiyuan 1996). Some papers looked at too broad a range of problem, such as looking at impotence and low sperm count (Jiasheng 1987) and one combined the use of herbs and injections (Zongchang 1997). Outside of these thirteen, there were more papers on the use of herbs and infertility which were not looked at for this paper.

This paper concentrates on the three that maintained the best clinical research standard of the thirteen papers. This included the analysts being unaware of the treatment given and the groups being comparable at baseline. The two papers written by Siterman (1997 and 2000) had matching andrological profiles where men had for example isolated oligozoospermia or asthenoteratozoospermia in both the treated and control groups. The paper by Gerhard (1992) excluded men with thyroid dysfunction, adrenal disorders and hyperprolactinaemia from their study as well as taking full histories and considering predetermining factors as to how they effect the results. These included 12 who had a varicocele, 5 who had genital tract infections and 10 who were smokers. None of the three papers included anyone who had had any relevant treatments for at least 12 months before. So again limiting the effect of other influences. Controls were used in two of the three papers. The Gerhard (1992) paper did not use a control. The controls in the Siterman (1997 and 2000) papers were untreated. They stated that this was because every acupuncture point has an effect on the body, so no point could be considered as a placebo.

Two of the papers, one by Gerhard (1992) and the first of the papers by Siterman (1997) were looking broadly at the effects of acupuncture on sperm. Siterman (2000) then went on to do another study where they looked more at sperm density.

All three papers talked about using points as to the principles of TCM. (Traditional Chinese Medicine)

The points were the same for everyone, no explanation was given as to why points were chosen only that they used the principles of TCM.

Specific combinations of the above points were selected according to the principles of TCM but again it was not explained as what points might have been used for which category of TCM.

In the second paper by Siterman (2000) there was more of an explanation of the points used as they divided up their use into two broad categories. They also went on to repeat a cycle of treatment in a couple of cases.

There were many different points used in the three studies, over 30 in total.. This emphasises the possible need to understand and differentiate to TCM in order to prescribe the points needed 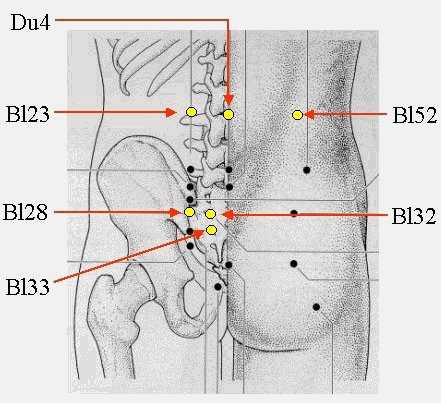 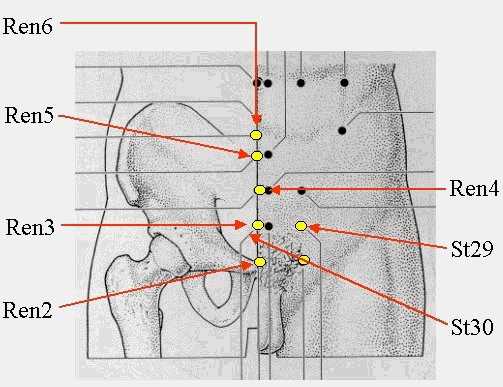 The results were promising. Gerhard (1992) found that :

Through looking at motility as the examination criteria they particularly found that acupuncture was most effective in treating :

There was also a positive feedback to the treatment. 24 out of the 30 questionnaires were returned, a high number enjoyed the treatment with effects such as feeling calmer, sleeping better and increased libido. Most of them would go through the experience of acupuncture again.

Siterman (1997) in their first study where they were looking generally at the effect of acupuncture on sperm parameters showed the control group with no significant change, whereas the

The second Siterman (2000) study where sperm density was looked at they again found no significant change in the control group, whereas in the treated group:

Overall the papers showed good results but they did show some problems. Mainly in that the sample sizes were quite small at between 30 and 40. Larger groups are needed. This was something that was recognised in all the papers. The main problem, however, was in relation to there not being an adequate length of follow up. Gerhard (1992) said they looked at the changing long term effect of acupuncture by doing spermiograms at 1, 5 and 12 weeks after treatment. In the Siterman (1997 and 2000) studies the spermiograms were analysed 1 month either side of the treatment period. The papers do have some promising results but it seems that further follow ups should have been included as sperm counts do go up and down related to the delicate process of spermatogenesis. Even though Gerhard (1992) did take three different readings the latest was 12 weeks. Another reading would have been good as it should be remembered that spermatogenesis takes approximately 74 days and so the real effect of the acupuncture may not be seen. This is perhaps partly shown in the second Siterman (2000) study where a further improvement was seen when two more cycles of treatment were given.

Male infertility is a problem and there is little available treatment. Acupuncture may be a possible alternative or addition to these treatments.

The research was limited, but the results were promising. In particular it has been shown that motility, density and vitality were encouraged with acupuncture. Gerhard (1992) found particularly good effect in younger men, non smokers and varicocele carriers. Whereas Siterman (2000) found azoospermia and genital tract inflammation had the best results.

These results are encouraging and hopefully will lead to further studies to a good clinical research standard to validate these findings and move forward the understanding that acupuncture can have in treating male infertility. It would be particularly interesting to do longer follow-ups taking into account spermatogenesis.

Shealy C, Helms J, McDaniels A (1990) Treatment of male infertility with acupuncture The Journal of Neurological and Orthopaedic Medicine and Surgery 11 (4) 285-286